The Forester for the Trees: Epilogue

The first time I drove Harold after finishing my 1,500-word ode to him, a young guy driving a Mustang crossed four lanes of traffic out of turn and totaled my beloved Subaru Forester.

The collision happened on a zippy four-lane road, which the Mustang’s driver was attempting to cross perpendicularly. From my vantage point, I was driving in the far-right lane. The Mustang first registered in the left corner of my vision as a panicked white flash; the driver had misjudged the speed of the traffic he was trying to cut through, then floored the accelerator and shot across the roadway to try to hurtle out of his mistake. I braked as the Mustang illegally surged into my lane, but still t-boned the car’s passenger-side door with Harold’s snout, which destroyed Harold’s engine compartment.

The Forester’s safety system acquitted itself well; I came out with no injuries except sore hands from strangling the steering wheel throughout the collision. Mentally, though, I was a little off. I stayed outwardly composed at the scene, but looking back, the wreck created several incongruities in my head:

The timing of Harold’s death—so soon after I’d articulated what the Forester meant to me—has remained in my mind as much as the wreck itself. The obvious lesson from the incident’s timing is to never write about the things you care for.

But the better lesson is to always write about the things you care for, because some guy in a Mustang could kill one of them later today. I was too bullheaded and lazy to learn this while my parents were fighting their terminal illnesses, but the SUV they left me got it through. Thanks, Harold.

And welcome to the Steger Sector, yet-to-be-named replacement Forester. 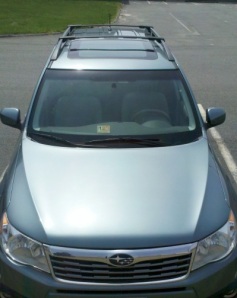 © Martin Steger, Stegersector.com, 2014. Unauthorized use and/or duplication of this material without express and written permission from this blog’s author and/or owner is strictly prohibited. Excerpts and links may be used, provided that full and clear credit is given to Martin Steger and Stegersector.com with appropriate and specific direction to the original content.